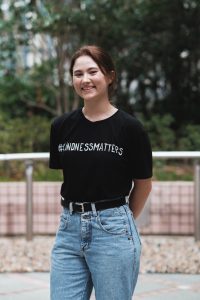 A: Hello, I am Alison. I’ve joined ImpactHK for about 8 months and have handled around 18 cases. I love working out after work – especially Brazilian Jiu Jitsu!

Q: Why do you want to be a case worker?

A: It sounds a bit cliche but I want to have a meaningful job. Back in university, I studied psychology and recognised how difficult it is to live in our society. In fact, everyone needs counseling as everyone has their own problems and is suffering. Being a caseworker means that everyday, you can change someone’s life for the better.

Q: What is your most memorable emergency?

A: One of my clients is very outgoing and extroverted. A couple months  ago, we noticed that his voice suddenly began to change. The doctors said there was a tumour near his throat but hadn’t confirmed whether it was benign or malignant.

The next day, I accompanied him to his hospital appointment, where 4 doctors and one medical social worker surrounded us. They confirmed that it was stage three cancer and explained that the tumour could grow and could suffocate him at any time. Immediate surgery was the only solution. Do you understand the sense of urgency? Either you choose to wait for death, or not speak for the rest of your life.

When an outspoken person loses his right to speak, how would he feel?

The stress of a life and death situation was unbearable. Even though I was not him, I could empathise with his situation. I calmed down after the appointment, and   focused on analysing his options with him. Isaid no matter what he decided, I would support him 100%. However, if he decided not to do the surgery, we needed to immediately write a will and plan for the last stage of his life.  I was actually so worried about him, but wanted to respect his wishes. . He said he needed some time to consider, but after considering it for a few days, he decided to do the surgery.

That was the most sudden and shocking thing I have been through here. We were in the same boat facing imminent death. Despite how difficult this challenge was, I am grateful to support him throughout his journey.

Q: What is the most touching moment?

A: I always feel touched when a client is willing to share his/ her stories with me. Talking about our traumatic  experiences is never easy. When they do so,  this means that they trust me.

Q: When have you been inspired by clients?

Ａ: I have a client who has been in the service for over 4 years, he’s relapsed back into homelessness a few times. When I first took on his case, many coworkers told me it would be a challenge. Still, I had numerous discussions with him where we reflected on his strengths and weaknesses, and motivated him to change and fight for his future. Fast forward half a year later, he’s been able to keep a job for more than 3 months! He even got promoted! This just demonstrates how with perseverance and determination we can over come any challenge, even breaking out of homelessness.

Q: When was a time where you felt the most powerless?

A: Probably when a client’s mental health condition continuously worsen. Despite trying my best, and accompanying her through different stages,  I still watched her fail repeatedly, and she even refused to speak to me. I felt very powerless at that moment, and it seemed like everything I had done was in vain. Luckily my colleagues were really supportive, they gave me really useful feedback and encouraged me to carry on.

Q: Has your perception of the homeless community changed compared to the past?

A: Yes, I vaguely remember something from my childhood. When I was about 9, I saw someone laying at the corner of the street, and asked my mom if we could simply bring him back to our place and let him live with us. He could have a place to stay, save money and get back on his feet again!

My mom just smiled and I didn’t understand why she did not continue the conversation.

Only after growing up and becoming a caseworker, I understand that shelter is not enough for people experiencing homelessness. They are all facing complex issues and need a long time to heal. Housing is only a part of the solution,but there is so much more to follow up on. The whole journey is so difficult.

Q: Any message for the public?

A: Do not underestimate the power of your words. Words such as “crazy”, “dirty” and “useless” only reinforce labels that are difficult to remove.